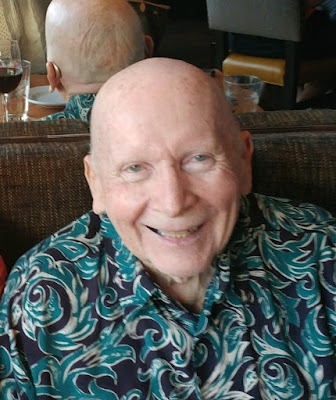 Jack Egan read poetry at the Sedona Poetry Slam a few times; I was able to capture him on video at the Sedona slam on Dec. 3, 2011. His "Up" poem became legendary.
He wrote me a few letters to the editor and press releases, all about his work with charities and the St. Vincent de Paul Society. When he popped in to drop these off, I always encouraged him to come and slam.
Twice, when interstate lotteries reached record high levels, he came to the Sedona newsroom and told me he bought a ticket, gave me a copy and said he agreed to split it with me should we win the jackpot.
He will be missed.
Jack Egan performs in the first round of the Sedona Poetry Slam on Dec. 3, 2011


Jack Egan performs in the second round of the Sedona Poetry Slam on Dec. 3, 2011


Jack Egan performs "Up" in the third round of the Sedona Poetry Slam, 12-3-2011. Great poem, and with audience participation, too.

John Egan, 86, of Sedona, Arizona, passed away Sunday, October 11. "Jack" to his many friends was born in the Rogers Park neighborhood of Chicago on March 1, 1934.

As a teenager, he worked as a busboy to earn money to pay his tuition to Loyola Academy High School. A bright student and talented runner, he was awarded a scholarship to Loyola University of Chicago where he earned a degree in English while running sprints and relays on the track team. Such was his success as a runner that he was inducted into the Loyola University of Chicago Hall of Fame in 1980.

More importantly, at Loyola he met the love of his life, Mary Kay.

After graduating college, Jack served in the U.S. Navy for four years as a bombardier/navigator spending time on the USS Ranger (CV-61) aircraft carrier and was married. After his service, Jack returned to teach English at Loyola Academy. After a year of teaching, he took a sales job to support his growing family.

Jack was transferred from Chicago to Southern California while working for Avery Label Corporation. He had a very successful career in sales working for several companies. He lived in Whittier, Calif., and then Newport Beach. Along the way, he and Mary Kay had four children.

In 2010, Jack moved to Sedona to enjoy the beautiful Red Rocks and to be close to family. After a long illness, Jack passed away peacefully at home surrounded by his loved ones.

A celebration of life will be planned for a later date. Consider making a donation to St. Vincent de Paul conference in his honor.