The Sedona Poetry Slam begins its slam season on Saturday, Nov. 4, at 7:30 p.m. at the Sedona Arts Center, 15 Art Barn Road, Uptown Sedona.
A poetry slam is like a series of high-energy, three-minute one-person plays. Slam poetry is an art form that allows written page poets to share their work alongside theatrical performers, hip-hop artists and lyricists. All types of poetry are welcome on the stage, from street-wise hip-hop and narrative performance poems, to political rants and introspective confessionals. Any poem is a "slam" poem if performed in a competition. All poets get three minutes per round to entertain and inspire the audience with their creativity. 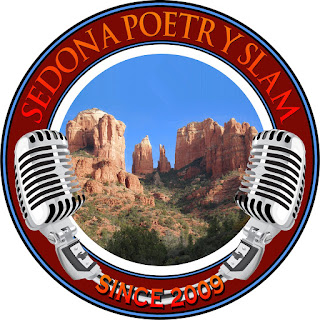 All poets are welcome to compete for the $75 grand prize and $25 second-place prize. To compete in the slam, poets will need three original poems, each lasting no longer than three minutes. No props, costumes nor musical accompaniment are permitted. The poets are judged Olympics-style by five members of the audience selected at random at the beginning of the slam.
Poets in the Sedona Poetry Slam come from as far away as Phoenix, Tucson and Flagstaff, competing against adult poets from Sedona and Cottonwood, college poets from Northern Arizona University, and youth poets from Sedona Red Rock High School.
The second slam will be at the Sedona Arts Center on Saturday, Dec. 16. The following five slams will take place at Mary D. Fisher Theatre, 2030 W. SR 89A, Suite A-3, in West Sedona, on Saturdays, Dec. 30, Feb. 3,  April 7, May 5 and May 26.

Tickets are $12. For tickets to the Sedona Arts Center slams, call 282-3809 or visit sedonaartscenter.org. For tickets to the Mary D. Fisher Theatre slams, call 282-1177 or visit SedonaFilmFestival.org
The 2017-18 season will culminate in selection of Sedona's seventh National Poetry Slam Team, the foursome and alternate who will represent Sedona and the Verde Valley at the National Poetry Slam in Chicago in August.
The Last Chance Slam on May 26 will be the final opportunity for poets who want to qualify for the 2018 Grand Slam. With every regular slam, poets earn points toward a slot in the Grand Slam, on Saturday, June 9. The poets who make the Sedona National Poetry Slam Team at the final contest will represent Sedona and share the stage with 350 of the top poets in the United States, Canada and Europe at the week-long National Poetry Slam in Chicago in August.
Sedona sent its first team to the 2012 NPS in Charlotte, N.C., its second to the 2013 NPS in Boston and Cambridge, Mass., and its third and fourth to Oakland, Calif., its fifth to Decatur, Ga., and its sixth to Denver. For more information, visit foxthepoet.blogspot.com.
The prize money is funded in part by a donation from Verde Valley poetry supporters Jeanne and Jim Freeland.
Contact host Christopher Fox Graham at foxthepoet@yahoo.com to sign up to slam early by Friday, Nov. 3, or arrive at the door by 7 p.m. to sign up the day of the slam. Poets who want to compete should purchase a ticket in case the roster is filled before they arrive. The Sedona Poetry Slam will be hosted by Graham, who represented Northern Arizona on 10 FlagSlam National Poetry Slams in 2001, 2004-06, 2010 and 2012-17. Graham has hosted the Sedona Poetry Slam since 2009.
What is Poetry Slam?
Founded at the Green Mill Tavern in Chicago in 1984, poetry slam is a competitive artistic sport designed to get people who would otherwise never go to a poetry reading excited about the art form when it becomes a high-energy competition. Poetry slams are judged by five randomly chosen members of the audience who assign numerical value to individual poets' contents and performances. Poetry slam has become an international artistic sport, with more than 100 major poetry slams in the United States, Canada, Australia and Western Europe. Slam poets have opened at the 2010 Winter Olympics, performed at the White House and at the United Nations General Assembly and were featured on "Russell Simmon's Def Poets" on HBO.
For more information, visit poetryslam.com or the PSi channel on YouTube.
The thoughts of FoxThePoet at 11:29 AM No comments: