Jokyr at the Nerd Poetry Slam -
The thoughts of FoxThePoet at 5:12 PM No comments:

On the 600th aniversary of the Battle of Agincourt

WESTMORELAND. O that we now had here
But one ten thousand of those men in England
That do no work today! 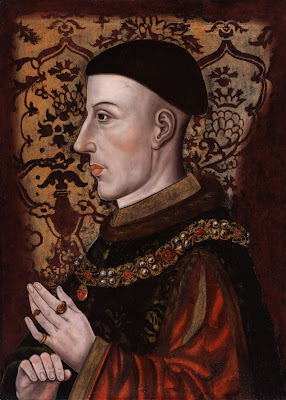 KING HENRY V. What’s he that wishes so?
My cousin, Westmoreland? No, my fair cousin;
If we are mark’d to die, we are enow
To do our country loss; and if to live,
The fewer men, the greater share of honour.
God’s will! I pray thee, wish not one man more.
By Jove, I am not covetous for gold,
Nor care I who doth feed upon my cost;
It yearns me not if men my garments wear;
Such outward things dwell not in my desires.
But if it be a sin to covet honour,
I am the most offending soul alive.
No, faith, my coz, wish not a man from England.
God’s peace! I would not lose so great an honour
As one man more methinks would share from me
For the best hope I have. O, do not wish one more!
Rather proclaim it, Westmoreland, through my host,
That he which hath no stomach to this fight,
Let him depart; his passport shall be made,
And crowns for convoy put into his purse;
We would not die in that man’s company
That fears his fellowship to die with us.
This day is call’d the feast of Crispian.
He that outlives this day, and comes safe home,
Will stand a tip-toe when this day is nam’d,
And rouse him at the name of Crispian.
He that shall live this day, and see old age,
Will yearly on the vigil feast his neighbours,
And say “To-morrow is Saint Crispian.”
Then will he strip his sleeve and show his scars,
And say “These wounds I had on Crispin's day.”
Old men forget; yet all shall be forgot,
But he’ll remember, with advantages,
What feats he did that day. Then shall our names,
Familiar in his mouth as household words-
Harry the King, Bedford and Exeter,
Warwick and Talbot, Salisbury and Gloucester-
Be in their flowing cups freshly rememb’red.
This story shall the good man teach his son;
And Crispin Crispian shall ne’er go by,
From this day to the ending of the world,
But we in it shall be remembered-
We few, we happy few, we band of brothers;
For he to-day that sheds his blood with me
Shall be my brother; be he ne’er so vile,
This day shall gentle his condition;
And gentlemen in England now-a-bed
Shall think themselves accurs’d they were not here,
And hold their manhoods cheap whiles any speaks
That fought with us upon Saint Crispin’s day. 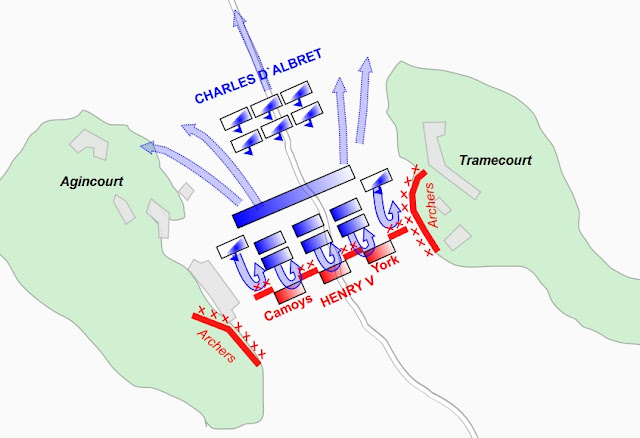 During the Hundred Years’ War between England and France, Henry V, the young king of England, leads his forces to victory at the Battle of Agincourt in northern France.
Two months before, Henry had crossed the English Channel with 11,000 men and laid siege to Harfleur in Normandy. After five weeks the town surrendered, but Henry lost half his men to disease and battle casualties. He decided to march his army northeast to Calais, where he would meet the English fleet and return to England. At Agincourt, however, a vast French army of 20,000 men stood in his path, greatly outnumbering the exhausted English archers, knights, and men-at-arms.
The battlefield lay on 1,000 yards of open ground between two woods, which prevented large-scale maneuvers and thus worked to Henry’s advantage. At 11 a.m. on October 25, the battle commenced. The English stood their ground as French knights, weighed down by their heavy armor, began a slow advance across the muddy battlefield. The French were met by a furious bombardment of artillery from the English archers, who wielded innovative longbows with a range of 250 yards. French cavalrymen tried and failed to overwhelm the English positions, but the archers were protected by a line of pointed stakes. As more and more French knights made their way onto the crowded battlefield, their mobility decreased further, and some lacked even the room to raise their arms and strike a blow. At this point, Henry ordered his lightly equipped archers to rush forward with swords and axes, and the unencumbered Englishmen massacred the French.
Almost 6,000 Frenchmen lost their lives during the Battle of Agincourt, while English deaths amounted to just over 400. With odds greater than three to one, Henry had won one of the great victories of military history. After further conquests in France, Henry V was recognized in 1420 as heir to the French throne and the regent of France. He was at the height of his powers but died just two years later of camp fever near Paris.

Some 90 bannerets and others, including:

Among the circa 1,500 prisoners taken by the English, were the following French notables:

The thoughts of FoxThePoet at 5:30 AM No comments:

The largest and sharpest image ever taken of the Andromeda galaxy


This image, captured with the NASA/ESA Hubble Space Telescope, is the largest and sharpest image ever taken of the Andromeda galaxy — otherwise known as M31.

This is a cropped version of the full image and has 1.5 billion pixels. You would need more than 600 HD television screens to display the whole image.

It is the biggest Hubble image ever released and shows over 100 million stars and thousands of star clusters embedded in a section of the galaxy’s pancake-shaped disc stretching across over 40,000 light-years.

This image is too large to be easily displayed at full resolution and is best appreciated using the zoom tool.

Happy Back to the Future Day