When the medical examiner offers,
decline the autopsy report
instead remember him
as a photograph,
a memory of frozen time
of some long, far-off roadtrip
when you got too drunk to navigate
feet
in the right
or left
order
and he carried you
shoulder to shoulder
back to the stranger’s sofa 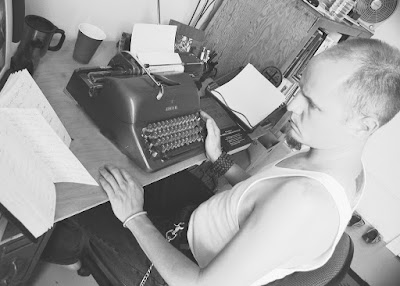 but if you must
if curiosity or some sense of honoring the dead
sways to accept,

EXTERNAL EXAMINATION
does not describe the man,
no, he is internal
the external is the zippered bag
which carried him
394,494 is an even composite number composed of four prime numbers multiplied together:
2 × 3 × 37 × 1777
the mnemonic device is easy to compound
2: the number of his children
3: the number of his survivors
37: the age he was when you last spoke
1777: the Battle of Saratoga
because you were never certain if you were his Benedict Arnold
or he was yours

CLOTHING AND PERSONAL EFFECTS
are the inconsequential pajamas
multicolored, plaid
the kind he always wore
when you drank coffee
and his wife made breakfast
the wedding band
devolved from its sacraments
now just “a white metal ring”
divorced from its vows
“with black paint”
faithlessly cold
“on the left ring finger”
you remembered when he swore those vows
on the grassy lawn in Oak Creek Canyon
you kept the black kippah from the service
though you have never been to a Jewish wedding since

EVIDENCE OF MEDICAL INTERVENTION
will not express the failure in the hands of the paramedics
who knew him from the grocery store
or saw him in the newspaper
the paragraph only notes the remnants
of the attempt to stop this destination
defibrillator pads
clear!
on the lateral aspects of the torso
clear!
EKG pads on the deltoids
clear!
bilaterally on the medial aspects of each leg
there is no followup paragraph
describing how the firefighters told his sons he was gone
you will not find footnotes describing the wail of his wife
how the glass in the house reverberated 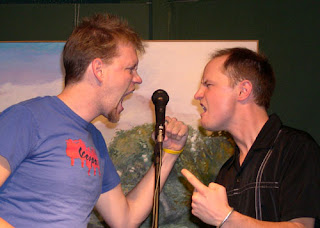 SCARS, TATTOOS AND OTHER IDENTIFYING BODY FEATURES
measure the weight of lines and cuts
ink and healed wounds
a 5 x 1/8 scar curvilinear scar on the posterior parietal portion of the scalp
was unhidden by his shaved head
the report omits the motorcycle accident
that caused the oblique scar
adjacent to the superior margin on the left clavicle
you will have to remember he always told that the same way
like a goddamn war story
how the bike went down on the asphalt
the drugs in his system
which kept him alive and unfazed
until the paramedics arrived
not like this time


ADDENDUM from the poets:
It was Chinese
and we knew him by it
On the upper central portion of the back is a large bar code tattoo
there will be no attempt made to scan it
but he did it once for you at a bookstore
you will remember the code is for “Slams: Volume One Dallas-March 1999”
available for $15.99
his tracks are Nos. 7 and 18
“God, Stadium Seating and Little Girls” is a ballad to Texas
the self-aware irony one sees in small towns
“True Power” is a sin caught in the throat
all the words spit for naught
considering the manner of his death


ADDENDUM from the poets:
this is the one secret we still have
not notated in the public record
the mark we alone remember
that the county will not take from us
we who knew him will speak of it in whispers

do not add it to this report

the GENERAL EXTERNAL EXAMINATION notes
well-developed
well-nourished
Caucasian male
compatible with the reported age of 40 years
body is 66 inches in length and weighs 128 pounds
there is no notation indicating the change from his birth certificate
facial hair: goatee
corneas opacified
irises blue
conjuctivae congested
the teeth and natural and in good condition
there is no mention of the words they once held
the trachea is in the midline
no comments made about the force of breath
per line or stanza
the fingernails are intact
there is no measure of the layers of ink that have been buried beneath them
no commentary in how the fingers worked a typewriter
the impression of keys in the fingerprints
the soles of the feet are not remarkable
the report says
but they are, remember
when you got too drunk to navigate
feet
and he carried you
shoulder to shoulder
back to the stranger’s sofa
the soles of the feet are goddamn saviors
and they kept you alive more than once

INTERNAL EXAMINATION
involves a Y-shaped incision
the examiner calculates a 340-gram heart
which, must be noted, is larger than average
but you knew this already
despite his 128 pounds
he had the heart of giant twice his size
now unbeating
it will be a dead weight in his chest that you cannot restart
no matter how much you want to

FINAL SUMMARY is a misnomer
it has no measure of the man
it only states the cause of death:
benzodiazepine and narcotic intoxication
it will make no commentary on his fatherhood
it will offer no final weight of his impact
it does not calculate the number of poems written
nor left unfinished
it will not say if he wanted to forgive you
for all the unkind words you spoke to each other
nor will say he wanted your forgiveness
so you could be brothers again


you will have no catharsis
no resolution to your civil war
you will remain incomplete,
unfinished,
unanswered,

and live with that