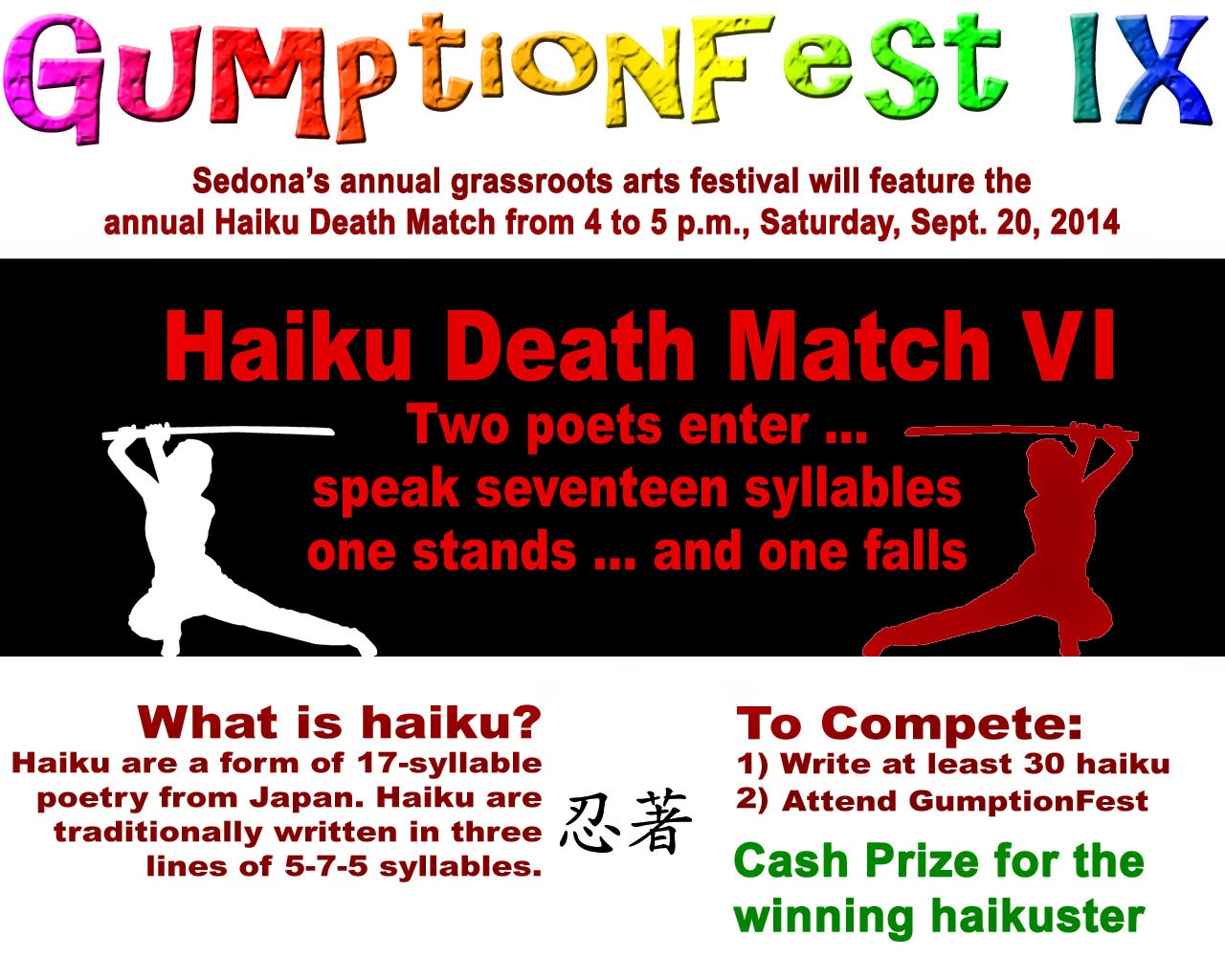 At GumptionFest IX, we will hold the Sixth Annual Haiku Death Match. It takes place on Saturday, Sept. 20 from 4 to 5 p.m. at Posse Grounds Park.

What is haiku?
Haiku (俳句) is a form of Japanese poetry consisting of 17 syllables in three metrical phrases of 5 syllables, 7 syllables, 5 syllables.

Japanese haiku typically contain a kigo, or seasonal reference, and a kireji or verbal caesura. In Japanese, haiku are traditionally printed in a single vertical line, while haiku in English usually appear in three lines, to parallel the three metrical phrases of Japanese haiku.

What is slam haiku?
Slam haiku used in a Haiku Death Match is far simpler: Use of three or fewer lines of 17 syllables. Slam haiku can be anything from a single 17-syllable line or simply 17 words. Two of mine:

Still Scared of Haiku?
Don't be, they're easy to write. Haiku Death Match haiku are not likely to be remembered centuries from now, so don't stress out. Write short poems that you find entertaining and enjoyable.

nautical chart
I touch the depth
of my mother’s ashes


slave quarters ...
the shapes of their shadows
in this dust


shades of blue ...
the deer’s remaining eye
cradled by bone

winter dusk
my grief released
from the crow’s throat

formation of geese —
a log opens
to the woodsman’s maul

I seem to be
an intermittent shadow . . .
summer clouds


Haiku are easy
but sometimes they don't make sense ...
refrigerator

she dances lithely
seduction under the moon
I ... hey, a nickel!

My life is Jello
Sitting, waiting in the bowl
Patiently to gel

"Doom" Haiku:
Frag demons for hours
Stare at the screen with red eyes
it's time for class

Cat haiku:
The rule for today
Touch my tail, I shred your hand
New rule tomorrow

Dog haiku:
You must scratch me there!
Yes, above my tail! Behold,
"Elevator butt."


Duncan Shields poem about Bob Ross teaching the history of North America was my favorite from the 2014 National Poetry Slam in Oakland, Calif. Shields performed the poem at the Legends Showcase. This is an earlier performance from April 5, 2014 at Astorino's, in Vancouver, British Columbia, Canada.
The thoughts of FoxThePoet at 7:51 PM No comments: