Miles Walser of the University of Minnesota performs on finals stage at the 2010 College Unions Poetry Slam Invitational.
“Nebraska”
By Miles Walser
For years you hid your tampons between mattresses, cut your hair short, lowered your voice, collected ace bandages and baggy clothes.
Small town talk stuck to your shoulders, you nervously shuffled around gas stations, never looked men in the eyes.
We share unwanted wombs.
While mine collects cobwebs, yours lies in a coffin in Nebraska.

This is the state that made you famous, handed movie scripts to Hilary Swank.
Your murder was Oscar worthy.
We are walking obituaries.
Your hate crime headline already carved across my forehead, people look at me and see your delicate hands and absent adam’s apple.

Brother, I’m afraid to use the bathroom…
(Walk in, head down, don’t look at another guy.) I’m afraid I’ll be discovered…
(Don’t talk, dont stare, don’t piss too quickly.)
Some thick armed man will call me a queer, tell me to show him my tits.
Suddenly I’m thrown against faucets, spit in my face, workboot gutting my stomach.
I see you on the movie screen and wonder if it’s my reflection.
I watch them push you into the dirt and drag me into their car as they break our bodies in between our thighs.

Brother, did it hurt when you kissed her goodbye?
Did you know you were breaking your promise when you told her you’d come back?
Did your parents panic?
Buy you a prom dress?
Struggle over pronouns at family gatherings?
And how long did it take your girlfriend to run her hands along your skin, soft as hers?
Did she leave her eyes open?

We are carcasses.
Untouched boxes of condoms.
We are public secrets, playground jokes, and horror films.
We are costumes, stuffing, binding and makeup.
We aren’t real men to them.
Invisible til we’re screaming.
They don’t remember our names until they read them on our tombstones.

They exposed you.
Decided you’re better off as splattered ink on newspaper.
Used you as a warning for the rest of us.
And there are days when it works.
Sometimes I forget that sidewalks can be safe.
Sometimes I confuse their shooting eyes for the bullet that met yours.
Sometimes I imagine the phone call my mother would get.
Can almost hear my sobbing friends.
Smell the lillies on my casket.
Touch my girlfriend’s black dress.
But brother, I am trying to be brave. 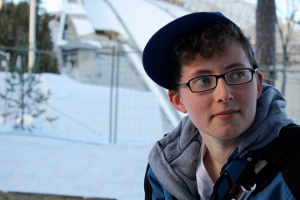 Miles Walser, convinced that he wanted to become a guard at Buckingham Palace, once spent an entire afternoon practicing his serious faces. Since then, his career goals have remained ridiculous, but now allow for occasional smiling. A student in Minneapolis, he represented the University of Minnesota at the 2010 College Unions Poetry Slam Invitational where he was named Best Male Poet.

He has also represented both Minneapolis and Madison, Wis., at the National Poetry Slam. He likes kittens more than the average person, and could never stand being land-locked.

For more of his work, check out mileswalser.tumblr.com.
The thoughts of FoxThePoet at 8:20 PM