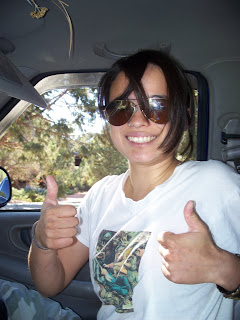 she called herself a hobo,
always homeward bound
but yet to find a doorstep to call her own
she came to kiss the red from the rocks
paint her lips with this Martian dust
swirl pirouettes in the vortices
verify that stars here match home
and chase down crash-landed aliens
looking for a one-way trip home to Perseus

she is joy
unpasteurized, caffeine-free, antioxidant-rich
joy
if it could drip from its source
sculpt itself into flesh and skin and bones
camber its soft exterior into curves
tender to trepid fingertips
hesitant to brush capsulated ebullience
lest it evanesce into vapor
like the morning fog
she zipped herself up behind a smile
radiant as auroras
to stay warm in the Yukon

I would have shed my skin to keep her warm
if it would have delayed her departure
a few hours more
she left me thrice:
to smell the stories wafting on Diné desert
see tors resistant to harassing winds —
play in a park where symbols of peace
were even written on the stones —
pioneer the plateau seared asunder
by patient waters that still run wild
too oblivious to laugh at our cages
knowing that they too will one day fall
Ozymandias could not conquer the sands
Hoover cannot break the canyon's will
though the crest once offered us a view
down to the moonlit sea
all endeavors come to an end
despite the glory
of their lofty dedications

each time, the gravity of our weight
pulled orbits back to the same ellipse
we shared atmospheres
and now with her light years across the plain
it's harder to breathe the air
before I knew her grace

I couldn’t have loved her better
goodbye was always on our lips
but when the last one came
it broke me down the middle
in the center of my city
tourists who came for millennial stones unbroken
saw us cleave together our last moments
and for the first time, she shed tears
broke open her dam
to cleave the street beneath us in two
in a way only the canyons know
the red rocks above trembled in dread
conjuring that winds and creeks had taken their toll
but she, unleashed, could finally break them into red sand
washing them like blood into the seas

there, at a crossroads I could recreate from memory
she said I would not cross the road with her
I was unable to follow
could not take her trek homeward bound
because I had never been
she carried my heart across the asphalt lanes
tied up in her pack
beneath snacks for the road
betwixt books and rolled socks
she carried it in secret
which I knew as she walked away from me
along a stretch of road
that seemed to widen for miles
until I lost her behind what could have been her next ride
or mere passersby
stained with her goodbyes
I watched until she was vapor and wind
red hat and pack
and then a mirage
as if she never was
but the hollow in my chest
beat her empty echoes with thumps in rhythm to her wandering footsteps
I send out platoons of foxes to find her
seek her out even in cities unknown to their habits
hoping their spying slyness
can catch her eye

now I seek out hitchhikers
the way addicts itch for a fix
I want to ask if they've seen her
if I can glean some knowledge of her whereabouts
and if they haven't yet
if they would pass on a message in my absence:
when the first winter breeze
blows in from the north
I will strip naked wherever I am
in the midst of Times Square,
the hollow of empty woods
or in my own living room
let her cold kisses caress all my sharp curves
feel her twirl around all my edges
inhale her joy so deeply
the atmosphere in my lungs turn to ice
all my pores will rise into goosebumps
to return her ten-thousand kisses
send all my silent words northward to find her
along whatever road she finds herself
wrap the embrace of breath around her
so she feels my arms again
even if just once more
even if just in dreams
even if she never knows
The thoughts of FoxThePoet at 9:00 AM 2 comments: the Greeks, too, had their nine
daughters each graced with a gift
to dispel on poets and playwrights
inspire the great works
and leave the men besmirched with laurels

this is some Grecian Zen monastic koan
to bleed my mind dry of superfluous thought
focus my attentions to the nexus of my world
leave my mind free to wander
sans distraction
sans intention
poetry tabula rasa
The thoughts of FoxThePoet at 8:00 AM 2 comments: 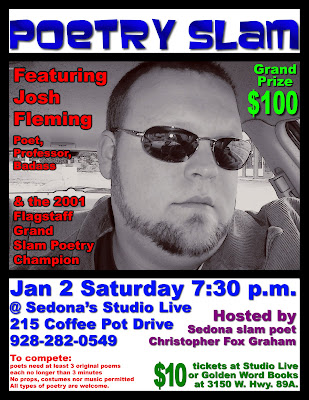 Sedona's Studio Live hosts a poetry slam Saturday, Jan. 2, starting at 7:30 p.m. and all poets are welcome to compete for the $100 grand prize.

Josh Fleming, a nationally touring, award-winning slam poet and college instructor, will perform in a featured reading between rounds.

Fleming started his poetry career in Northern Arizona where he competed with the first-ever Flagstaff National Slam Team, was its first-ever Grand Slam Champion in 2001, and traveled to Seattle for the 11th annual National Poetry Slam.

Fleming was part of the "Save the Male" national poetry tour in 2002, has authored one chapbook, "What Happened to Me," and co-produced a spoken word album, "Sonnets to listen to by an open fire..." with fellow poet Christopher Fox Graham, of Sedona.

Fleming then fell off the radar, worked at a gas station, was a zoo tour guide, went back to school, got his masters, fell in love, got married, bought a house, settled down and now teaches and coaches speech and debate at Pasadena City College, in Pasadena, Calif.

He loves poetry, he's missed poetry and he's glad to be back, Fleming stated in a press release. In conclusion: He's pretty sure he rocks.

To compete in the slam, poets need at least three original poems, each three minutes long or shorter. No props, costumes or musical accompaniment are permitted. All types of poetry are welcome.

The slam will be hosted by Graham, who represented Northern Arizona on the Flagstaff team at four National Poetry Slams between 2001 and 2006.

Founded in Chicago in 1984, poetry slam is a competitive artistic sport. Poetry slams are judged by five randomly chosen members of the audience who assign numerical value to individual poets' contents and performances.

Poetry slam has become an international artistic sport, with more than 100 major poetry slams in the United States, Canada, Australia and Western Europe.