"The Statue of the Virgin at Granard" by Paula Meehan 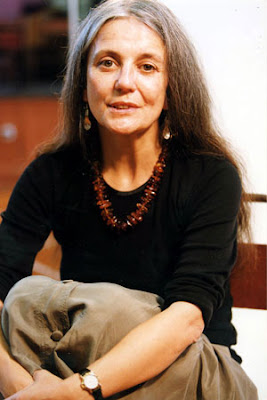 Paula Meehan was born in Dublin in 1955. Her poetry collections include Return and No Blame (1984); Reading the Sky (1986); The Man Who Was Marked by Winter (1991), which was shortlisted for the Irish Times/Aer Lingus Irish Literature Prize for Poetry; Pillow Talk (1994), which was shortlisted for the Irish Times Literature Prize for Poetry; Mysteries of the Home: A Selection of Poems (1996); and Dharmakaya (2000). She has written plays for children and adults. New Island Books have published Mrs Sweeney (1999) and Cell (2000). In recent years she was awarded the Marten Toonder Prize by the Arts Council and the Butler Award for Poetry by the Irish American Cultural Institute. She is a member of Aosdána, and lives in Dublin.

"The Statue of the Virgin at Granard"
By Paula Meehan

It can be bitter here at times like this,
November wind sweeping across the border.
Its seeds of ice would cut you to the quick.
The whole town tucked up safe and dreaming,
even wild things gone to earth, and I
stuck up here in this grotto, without as much as
star or planet to ease my vigil.

The howling won’t let up. Trees
cavort in agony as if they would be free
and take off - ghost voyagers
on the wind that carries intimations
of garrison towns, walled cities, ghetto lanes
where men hunt each other and invoke
the various names of God as blessing
on their death tactics, their night manoeuvres.
Closer to home the wind sails
over dying lakes. I hear fish drowning.
I taste the stagnant water mingled
with turf smoke from outlying farms.

They call me Mary - Blessed, Holy, Virgin.
They fit me to a myth of a man crucified:
the scourging and the falling, and the falling again,
the thorny crown, the hammer blow of iron
into wrist and ankle, the sacred bleeding heart.

They name me Mother of all this grief
Though mated to no mortal man.
They kneel before me and their prayers
fly up like sparks from a bonfire
that blaze a moment, then wink out.

It can be lovely here at times. Springtime,
early summer. Girls in Communion frocks
pale rivals to the riot in the hedgerows
of cow parsley and haw blossom, the perfume
from every rushy acre that’s left for hay
when the light swings longer with the sun’s push north.

Or the grace of a midsummer wedding
when the earth herself calls out for coupling
and I would break loose of my stony robes,
pure blue, pure white, as if they had robbed
a child’s sky for their colour. My being
cries out to be incarnate, incarnate,
maculate and tousled in a honeyed bed.

Even an autumn burial can work its own pageantry.
The hedges heavy with the burden of fruiting
crab, sloe, berry, hip; clouds scud east,
pear scented, windfalls secret in long
orchard grasses, and some old soul is lowered
to his kin. Death is just another harvest
scripted to the season’s play.

But on this All Soul’s Night there is
no respite from the keening of the wind.
I would not be amazed if every corpse came risen
From the graveyard to join in exaltation with the gale,
A cacophony of bone imploring sky for judgement
And release from being the conscience of the town.

On a night like this I remember the child
who came with fifteen summers to her name,
and she lay down alone at my feet
without midwife or doctor or friend to hold her hand
and she pushed her secret out into the night,
far from the town tucked up in little scandals,
bargains struck, words broken, prayers, promises,
and though she cried out to me in extremis
I did not move,
I didn’t lift a finger to help her,
I didn’t intercede with heaven,
nor whisper the charmed word in God’s ear.

On a night like this, I number the days to the solstice
and the turn back to the
light.

O sun,
center of our foolish dance,
burning heart of stone,
molten mother of us all,
hear me and have pity.
The thoughts of FoxThePoet at 3:42 AM

In my opinion, this a female version of "There are too many saviours on my Cross."
Both describe the fleeting and possibly the insincerity of our prayers and how how silent or impotent Mary and Jesus are to intercede with the pain of the earth. Here at the grotto - a soothing word of encouragement for a young lonely girl in the throes of labour.
Thanks for opening my eyes and ears to the deafness and blindness of not only the statue but also mine as well, who alas too often changes the channel.